As current President, I thought it was time to include how I came under the spell of orchids. Here’s my story and I hope it inspires you to explore orchid biology.

How I fell under the spell of orchids

I am a teacher by training and have always loved science, nature and plants. I spent a good part of my professional life working in botanic gardens where we developed public displays to connect visitors with the wonderful world of plants.

While working in education at the Royal Botanic Gardens in Sydney we developed an exhibition called Sex and Death: starring orchids and carnivorous plants which ran for three years (2005-2008) in the Tropical Centre (now redeveloped as the Calyx). Here we told the story of plant sex by exploring the fascinating pollination mechanisms of orchids. The concept of death was a great excuse for the gardens to display its extensive nursery collection of bizarre-looking carnivorous plants.

During this time, I became familiar with the most fascinating orchids around – such as Dracula vampira ‘Bela Lugosi’ (great name!) and Angroecum sesquipedale– which were skillfully grown by the gardens horticultural staff. It was fun telling their pollination stories in the interpretive panels. 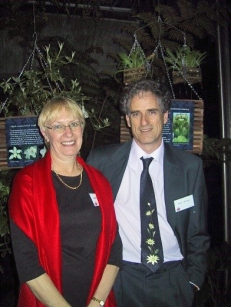 nt of some hanging orchids that are floral mimics. Native to the humid tropics of America, Dracula orchids use deception to take advantage of the reproductive instincts of fungus gnats.  Since fungus gnats like to lay their eggs in mushrooms, bizarre flowers of Dracula orchids imitate mushrooms with their appearance, scent, feel and location.  Thinking that a Dracula orchid is a mushroom, the gnats lay their eggs in the orchid flowers, and in the process, transfer orchid pollinia from flower to flower. While the Draculas use the gnats to reproduce, the gnats themselves get nothing. The insect eggs and larvae cannot survive for long in the flowers, and so the insect offspring will eventually die.

One of the most famous stories of cooperation between an orchid and its pollinator is that of the Christmas Star Orchid (Angraecum sesquipedale) of Madagascar and the Hawk-Moth (Xanthopan morgani predicta).  In 1888, Charles Darwin looked at the extremely long nectary spur of this orchid species and declared that there must be an insect with a proboscis long enough to drink nectar from the flower. Many people ridiculed this idea because no one had ever seen an insect with a proboscis that was 28-32cm long!  41 years later, a hawkmoth was indeed found to have a proboscis of 30-33cm long. (As this amazing photograph by Marcel Lecoufle shows.) 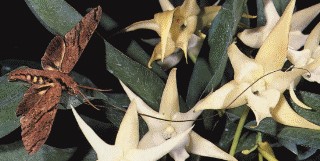 The botanic gardens had many knowledgeable botanists and horticulturists and I got to know many passionate orchid growers involved in Sydney’s local orchid societies. I bought my first orchid at one of our orchid shows and before I knew it, I was hooked …

I still have that Australian native orchid Dendrobium delicatum and my love affair with orchids continues to this day. I only grow orchids suited to the climatic conditions of my small front and back yard but somehow manage to always have something in flower to enjoy.